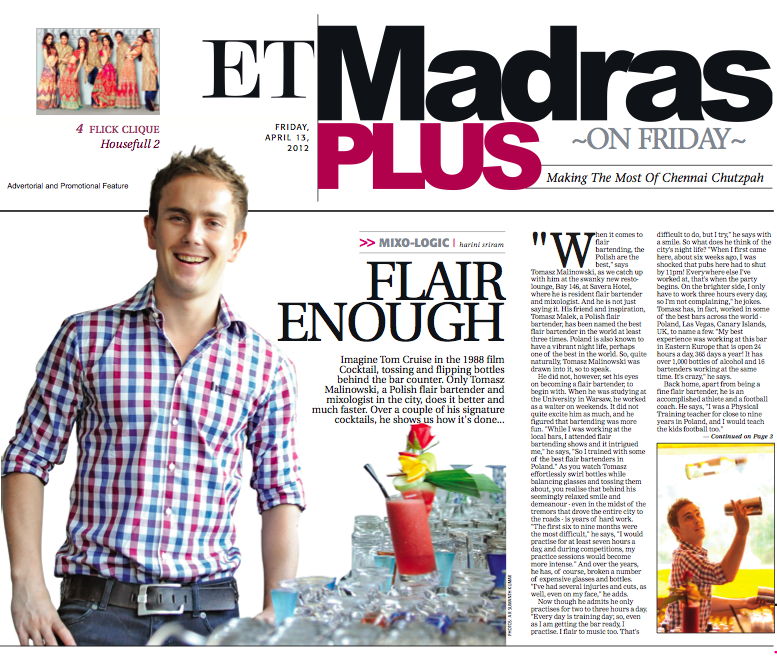 Chennai, 8 million  people,  4 **** Savera Hotel,  the very center of one of the most crowded metropolis in the world… and one quite unusual bar.

Our task was to change the hotel’s cocktail bar in a revolutionary way. We were to introduce a completely new looks, new menu, and an extraordinary experience.
The trick : it was a contest, with highest international standards and respectful competition.
.. and we have won!
Our team, led by Tomasz Malinowski, in cooperation with Juliana’s Leasure Agency from London, prepared a new „game-changing” concept for the Savera Chennai Cocktail Bar.
Moreover, while there – our team created 146 new exotic drinks, and served them over 1250 times.
After winning the contest we were to lead the change from the first day of march 2012.
Range of our responsibilities was quite .. “epic”.

•  Plan, project and execute the concept of a completely new cocktail bar.

•  Create a completely refreshed and joyful line of .. 146! Brand new cocktails and teach bar’s stuff on preparation and serving techniques.

Normally, all of the above would be a standard approach to any cocktail bar – but not in Chennai!
It’s all about competition and a very narrow market what changed our task from  reasonable to “almost impossible” level.

The main problem we had to face was the fact that in Chennai , only approx. 1000 people are wealthy enough to go to a restaurant , bar, or a hotel.
During the holiday season that number increases due to tourists, business people and other passersby, but still – having 60 local restaurants and 10 clubs to compete for their attention, makes the market almost inaccessible.
Competition there, is aggressive, cunning, sometimes mysterious but most of all – constantly battling for lower prices (especially because of the 62% tax rate added to any alcohol drink) .
Our secret weapon was something none of the rivals could offer – quality and diversity.
Our customers, due to high prices, were recruited from the wealthiest part of the society – and simply demanded the best! Exactly what we needed!
The Savera Hotel itself needed freshness, uniqueness, and a new market exclamation mark – shouting „come and visit us!” … again.

After thorough market research, mystery client approach combined with client conversations, and consultation with the owner – Ms. Nina Reddy,  we decided to prepare a set of unique, specially designed and unavailable anywhere else – 146 cocktails and revolutionize the menu!
We had to be innovative, creative, brave,  .. maybe a little bit insane even.
– but it worked! And worked marvelously.

The PIMP MY BAR consulting Savera Hotel – have we delivered on our word?!

It took us 2 whole weeks of intense work, training, and testing – but we’ve managed to complete the menu. What we’ve done was not only far away from the competition in terms of originality, but also – fulfilling the financial revenue, and margin part of the deal.  We’ve created something that was both profitable and tasty not mentioning original and completely new on the Chennair market.
After 3 months, Savera Hotel Cocktail bar, sold over 3500 drinks from our menu – while working only between 19:00  – 23:00. Our result was seen and judged as very impressive and related to in every local media. Our agreement with the owner was fulfilled, customers and our client – more than happy and eager for future cooperation.
… but that’s not all!

Out leader, Tomasz Malinowski made tremendous impression on the competition and local market wanting to know more – about his approach, ideas, plans. In consequence he gave 4 interviews to a number of local magazines.
His skills, talent, and unique character were appreciated by the client as well. One day before leaving, Tomasz received a new contract  from the client for another tour of bar consulting in one year time.

Chennai – we shall be back!